I feel that ever since I started my position here in Toronto in 1998, we have consistently encountered more or less the same core challenge (despite covering a wide palette of research areas). I refer to our never-ending pursuit of molecules we a priori attribute some value to. It all started with our interest in fluorinated BINOLs, which were initially really hard to make, but then my students mastered this class of compounds and developed some really nice applications. I also recall how we started with aziridines. It was Shadi Dalili (now teaching at UT Scarborough), who started working with cyclohexene imine. Iain Watson joined the project shortly thereafter and really taught us how to handle these sorts of material. Nowadays we deal with macrocycles, which are really tough both synthetically and from the standpoint of NMR characterization. But we are learning and are making progress. Still, it is always one kind of central molecule (or scaffold) we get transfixed by and put a ton of effort before learning how to deal with it. I tip my hat off to my students who keep passing this torch of hard-target search for things that are tough to make.

On the subject of the old stomping grounds… An old friend, Cathy Crudden (Professor at Queens U.: http://www.cruddengroup.com), came by today with her student Lacey Reid. Cathy met me at MaRS where I currently work (my SGC sabbatical…), we had a nice lunch (next one on me, Cathy!) and chatted about some heavily fluorinated biaryls. This discussion brought to memory my lab’s first inroads into fluorinated BINOLs. We eventually mastered them and I just want to share what was the origin. Here is it: 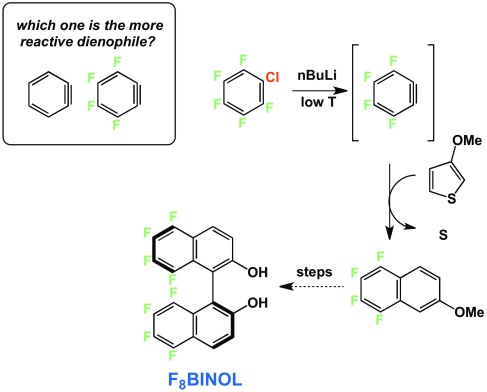 You see – we first wondered about the relative reactivity of benzyne vs tetrafluorobenzyne. The latter turned out to be way more stable and, consequently, less reactive. But it has been useful for us. We employed it in order to run Diels-Alder reactions with 3-methoxythiophene, which then led us to fluorinated BINOLs. I still see my man Subramanian Pandiaraju (my first PDF), who spearheaded this effort (he is now with Ontario Institute of Cancer Research) and we reminisce of the old days. Fundamental reactivity has always been central to us. At the end of the day, what we really care about is how molecules react with each other.