In 2009, Raines and Woolfson published their influential paper on the concept of n-to-pi* interaction in proteins (http://www.nature.com/nchembio/journal/v6/n8/full/nchembio.406.html). By analyzing the protein databank they came to the conclusion that there exists a previously unappreciated attractive interaction between backbone amides. This interaction arises from the delocalization of a lone pair of electrons (n) from an oxygen atom to the antibonding orbital (pi*) of the subsequent carbonyl group. For synthetic organic chemists this sort of interaction makes sense. Who can forget the Burgi-Dunitz trajectory of attack? However, it has gone under the radar of structural biologists, which is somewhat surprising (or not). Given the significance of this interaction, there is a push to adjust parametrization of many molecular modeling packages. There are many other implications, but what about peptide reactivity? I can think of one cool example. It comes from Kent and co-workers, who published an interesting Chem Comm paper not too long ago (http://pubs.rsc.org/en/content/articlehtml/2011/cc/c0cc04120c). In it, the authors explain the relatively low reactivity of prolyl thioesters in native chemical ligation. According to Kent, the n-to-pi* interaction is playing a role in diminishing the electrophilicity of the thioester. 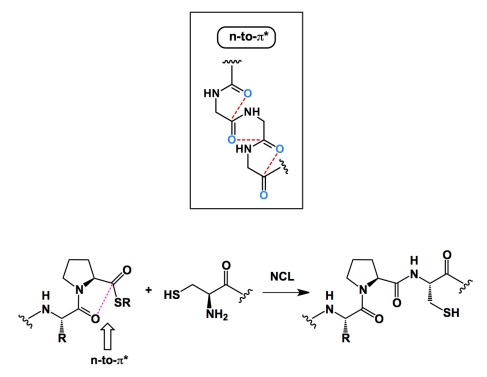