People often equate the presence of fluorine in organic compounds with increased stability and other unique properties. The trifluoromethyl group is sometimes erroneously equated with some “magical” stabilization. Honestly, I think we tend recall Teflon way too much. Tonight I want to talk about two fluorinated groups: one is well-known (CF3), while the other one is rather obscure (SF5). The reality is that the trifluoromethyl (CF3) substituent is not that stable (I did my whole PhD on it…). For instance, in some cases, you can quantitatively hydrolyze it under aqueous alkaline conditions into the corresponding carboxylate. But this is only part of today’s story. In terms of stability, I want to point to a lesser-known group – pentafluorosulfanyl (SF5) – which is poised to become a very interesting moiety with which to design materials and pharmaceuticals. At first glance, this thing just does not look right as there seem to be way too many fluorine atoms. But it is what it is: sulfur in the oxidation state “+6”. The hydrolytic stability of SF5-containing molecules makes trifluoromethylated analogs pale in comparison. Take a look at the reactions shown below! In addition, the van der Waals volume occupied by the SF5 group is slightly larger than that of the CF3 substituent. The SF5 group is also more lipophilic. This property, along with improved stability, ought to make SF5–containing compounds more and more interesting in drug design. In fact, there are examples of biologically active molecules that derive their properties from the unique characteristics of the SF5 substituent. There will be more on that in my future posts. 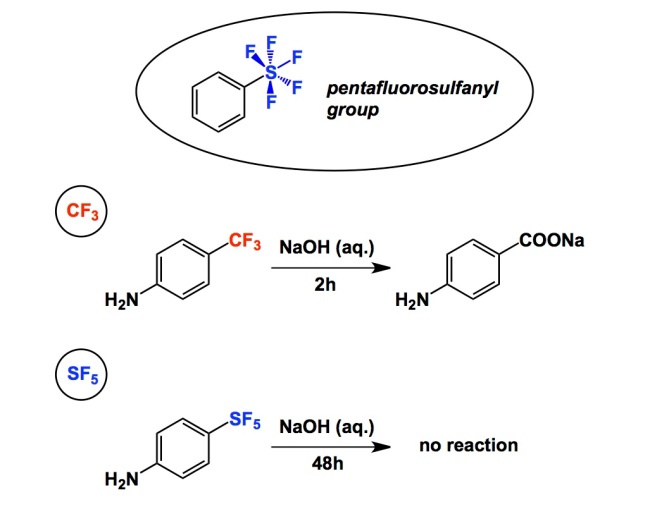