I was intrigued by Tian’s report of a palladium-catalyzed formation of allyl sulfones from hydrazines. Upon exposure to Pd(0), the allyl amine you see ought to ionize and undergo straightforward allylic substitution with the hydrazine derivative depicted. However, Tian and co-workers found that under oxidative conditions, the Pd-bound hydrazide ligand undergoes oxidation followed by extrusion of nitrogen and incorporation of the “rebound” sulfone unit. I am drawing this reaction as if it were a reductive elimination, but it is, of course, more likely that the soft sulfone-derived nucleophile attacks the Pd center of the corresponding pi-allyl complex. The authors have considered both of these possibilities, I am just showing one. 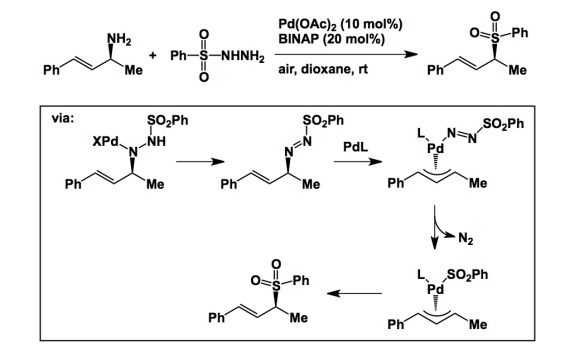 This paper also brought back some memories. My lab has published quite a bit on the subject of ionization of allylic amines under palladium catalysis. For example, about six years ago we found that N-protonation of allylic amines leads to rapid ionization and formation of palladium pi-allyl complexes. Thanks to Iain Watson in my lab, we have used this chemistry on a number of occasions. Here is a link to a representative paper, where my former students Igor Dubovyk and Iain showed that synthetically useful outcomes can also be secured by preventing proton-promoted ionization of allyl amines.