Not long ago, we took a liberty to sum up the progress made over the years in the area of alpha-boryl carbonyl chemistry. I was asked to write a perspective on this subject, which meant that I suggested that my able co-workers Zhi He and Adam Zajdlik work on the manuscript. These guys did an outstanding job and the paper is now on the Dalton Transactions website. You might say: “Wait a minute, this is an inorganic journal, are you an inorganic chemist?” I tell you what: if there is one thing I learned from my one of my heroes in chemistry, George A. Olah, it is that divisions among the branches of science are artificial crap.

Coming back to the subject of our paper, I just want to point out that there are some really interesting examples of alpha-boryl carbonyls out there and I am showing them below. It is difficult to regard these intriguing reagents as the mainstream of chemistry as they are not, dare I say, bench-stable. But these molecules did pave a way to some of the ideas we are pursuing in my lab. I view all of the entries below as part of our honour roll as their often unusual structures attest to the imagination of chemists who conceived them. 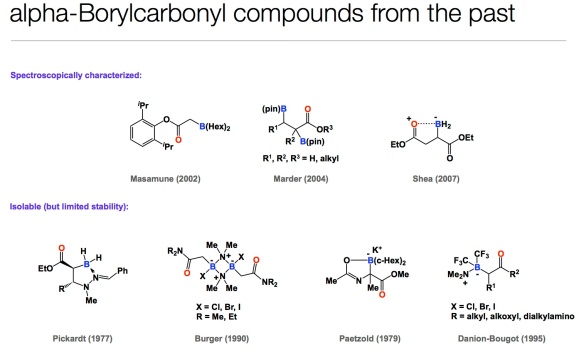 The point of our Dalton paper was to sum up what had been done prior to our work on stable alpha-boryl carbonyl compounds and, of course, discuss our own inroads in this area. Unlike the O-boron enolates, which react primarily as nucleophiles, our C-bound tautomers contain an electrophilic carbonyl group next to the nucleophilic alpha-carbon. We like to refer to these molecules as kinetically amphoteric (to distinguish from the other type of amphoterism, which is driven by protons and is thermodynamic in origin).