I just came back from Moscow, carrying with me some fond memories of the MCMC-2014 conference. There is one particular presentation I would like to comment on. Last Thursday, I heard a very interesting talk by Professor Terent’ev of the Zelinsky Institute for Organic Chemistry, who showed some mind-numbing examples of organic peroxides that are stable despite what their oxygen-rich frameworks might signal. Below is one of the molecules that possesses an impressively high melting point. 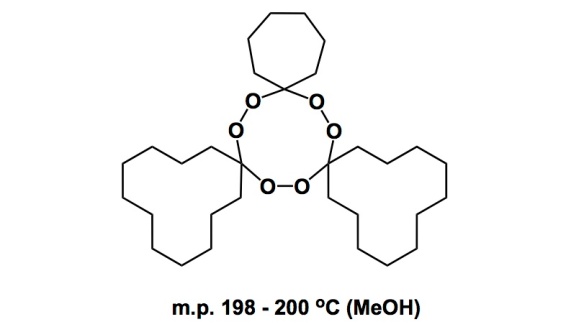 While it is possible to speculate on the origins of this unusual stability, I think a fundamentally important caveat needs to be clarified. This point goes back to my PhD years with Prakash and Olah. If you recall, one of the central discoveries of Olah’s career were the so-called stable ion conditions, which enabled isolation and characterization of carbocations in solution for the first time.

In contrast to their carbon congeners, the corresponding trivalent silicon species (above) have eluded characterization for a very long time, which might seem counter-intuitive given the fact that silicenium ions are considerably more stable thermodynamically. But this is precisely what I wanted to mention: the silicon species is more stable thermodynamically, not kinetically. In terms of kinetics, trivalent silicon is so electrophilic that the barrier to covalent bond formation with some of the weakest nucleophiles is exceedingly small. Coming back to peroxides, there are probably a number of causes (metal impurities?) that might trigger violent decomposition, despite the apparent kinetic stability of some notable cases. I do encourage you to look at the papers by Terent’ev as there are some real gems there.

2 thoughts on “On stability”