The stereoelectronic effect is behind a massive number of molecular properties, one of which is the propensity of certain groups to influence carbonyl reactivity. Some time ago, Houk and colleagues clarified the influence of cyclopropyl substituents on the pro-drug properties of esters. The half-lifes shown below are experimentally determined and speak for themselves: there is a profound effect of the cyclopropyl group on ester stability. But the main reason for my post is to bring up the value of isodesmic equations in evaluating relative reactivity (see Table 3 of the Org. Lett. paper). This straightforward tool is simple and effective in efforts to rationalize the role of neighboring substituents when a HOMO/LUMO interaction is evaluated. In the present case, the 2 kcal/mol stabilization of the cyclopropyl ester compared to the isopropyl one arises from hyperconjugative donation from the cyclopropane group into the pi*(CO) orbital. I think we should use this tool way more in our work (as we assess which molecules should be made and which ones should remain on our whiteboards). 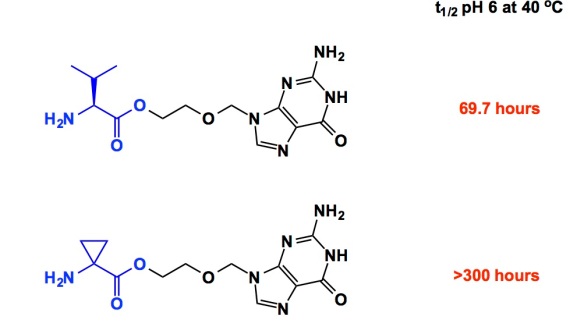 2 thoughts on “Stereoelectronics of ester hydrolysis”