Jeff St. Denis, pictured below, recently defended his fine PhD thesis and left behind a huge void. Our operations have benefited greatly from his expertise and we will miss his burly disposition. Jeff is a big guy, with a super strong arm, which might have turned him into a professional baseball player had he not chosen chemistry as his favorite pastime. Seriously – Jeff was heavily recruited into baseball while in college, but then something clicked and I became the beneficiary of his career choice. Jeff’s thesis turned into a clinic for how to pack useful functional groups into dense areas of space and turn them loose. Earlier this week his paper appeared in JACS. Below is a link. You will note that Joanne Tan is on this work as well, which is quite a story in its own right… Talk about raising the next generation of students! Joanne, who was trained by Jeff in the area of synthetic linchpins, started with us this past September and already made a big difference. There are other great folks on this paper – Adam, Piera, Frank, Shinya – who, together with Jeff, created a platform that now allows us to build small molecule fragments faster. You might ask: “Which fragments?” and I would tell you: “Hold on a bit, you will soon see crystal structures that show how some of the molecules which we have developed interact with proteins”. These are the fruits of our collaborative efforts with the SGC (Structural Genomics Consortium). These interdisciplinary studies aside, our research continues along the trajectory of a relentless pursuit of unusual intermediates in synthesis. In Jeff’s case, we have been exploring the chemistry of boron-containing enamides and found a way to stitch together oligoheterocyclic cores with notable efficiency. What’s next for Jeff? He just got a job at Astex (http://astx.com), a pioneer in fragment-based drug discovery. Jeff apparently did really well in his interview when those Astex folks flew him over to Cambridge, UK. I wish Jeff and his wife Megan the best of luck over there. It is nice that there are still cool job opportunities for freshly minted PhDs. 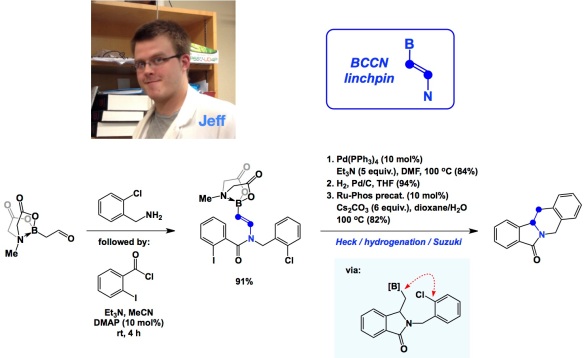 4 thoughts on “Linchpinning into the U.K.”