I want to talk about the levity with which organic molecules are sometimes depicted. More specifically, my point tonight deals with how biologists bastardize chemical structures.

Some background is in order. This past weekend we had prospective graduate students visit our department from other schools. This is one of those annual events that serve to remind us what our craft is all about. For me, one of the appeals of synthesis is in finding a low molecular weight entity that can interrogate a protein that is hundreds, if not thousands, of times larger in size. This is nothing but a spectacular manifestation of ligand efficiency, which bolsters the notion that all it takes in order to shut down some sophisticated cellular machinery is a few correctly positioned hydrogen bonds and hydrophobic contacts. Chemists who make such molecules deserve some respect in terms of how their compounds are rendered by the end users (biologists). This is where I have a problem. Some representative cases on display below prove my point. While there can be numerous semi-legitimate reasons for these egregious errors, it is strange to see this sort of stuff in reported crystal structures. Annoyingly, on several occasions, I heard the following comment: “Well, we did not really spend a lot of time refining the small molecule ligand because all we cared about was the protein“. Really? And which pivotal factor contributed to you solving the crystal structure? It was the protein’s low molecular weight “partner”. Ironic, isn’t it? 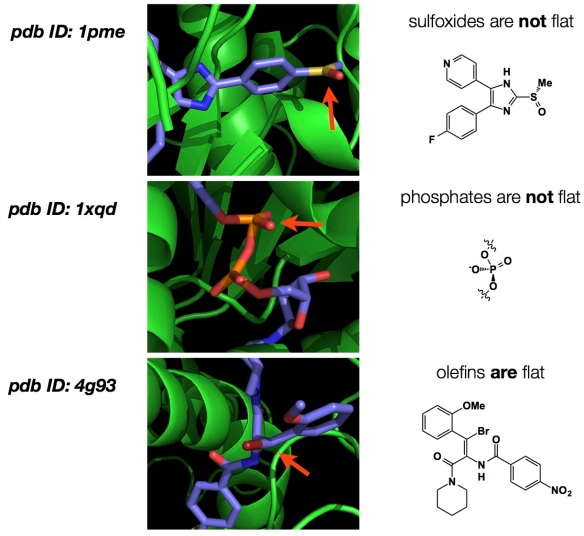