Thanks to Dr. Yusheng Xiong, I had a very informative visit to Merck in Kenilworth (New Jersey) this past Friday. The location of this site is very close to Rahway, which used to be Merck’s primary medicinal chemistry center. Since the acquisition of Schering-Plough several years ago, Kenilworth has been steadily turning into the main discovery hub for Merck.

While I can’t describe the proprietary details I learned during this trip, I can make several general statements that define the overall visit. When compared to the days past, there is clearly a new approach to drug discovery at Merck. This company used to be very much a small molecule-driven operation. It is now more about “whichever modality fits the target in question”. This is the main reason why there is so much interest in macrocycles, which was one of the topics covered in my lecture.

My second point is more scientific. Throughout the day, I had several discussions that involved some stereoelectronic arguments. While I cannot talk about them, I think I can mention a paper that just came out in J. Med. Chem. It describes the role of divalent sulfur in the structures of therapeutic agents and provides an excellent demonstration of intramolecular oxygen-sulfur interactions. Take a close look at the two structures below. There is no way (in my view) of guessing which one of these two extremely similar compounds is more effective in inhibiting VEGF. Interestingly, one of them is potent, whereas the other is completely inactive. People are just beginning to fully appreciate the involvement of sigma hole-driven interactions and, in the example below, conformational stabilization is evidenced in the shorter through-space O-S distance in the active molecule compared to the “dud”. 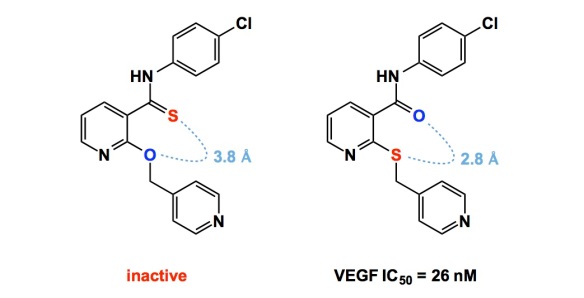