Every now and then I pause and wonder about the role of unnatural amino acids in chemical biology and drug discovery. Apart from obvious gains in accessible molecular diversity of peptide collections, the structural value of some of the commonly used unnatural amino acids it is not immediately clear, at least to me. While diversity is an extremely important consideration, one has to wonder about the molecular-level significance of, say, cyclohexyl alanine. Apart from general hydrophobicity, what would the cyclohexane chair “glued” to a peptide chain impart when thrown into the medley of more mundane amino acids? How will it fare?

I was surprised to find out that the chair I just mentioned does just fine when it comes to stacking. In a thought-provoking study, Gunaydin  and Bartberger point out excellent stacking abilities of cyclohexane. It appears that unsaturated rings found in drugs may be replaced with their saturated counterparts without losing potency even when it comes to stacking interactions with the side chains of aromatic residues. This should give us a lot of food for thought. What about asymmetric catalysis? Recall the importance of stacking interactions there. When we consider some widely used partially hydrogenated BINOL ligands, invoking stacking interactions in transition state assemblies might not be that outlandish if we think about Gunaydin  and Bartberger’s eloquent study in structural biology. 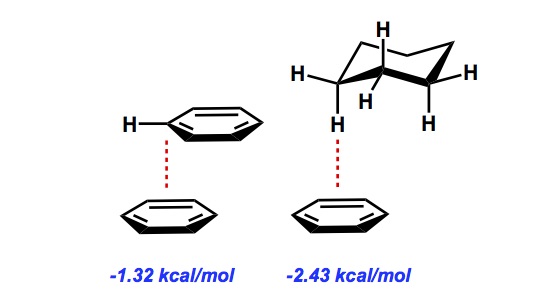 2 thoughts on “Planarity is overrated”