Some of you might recall me writing about the tremendous therapeutic success of anticancer agents whose structures were inspired by epoxyketone natural products. The reason this is a compelling package from a synthetic chemist’s point of view is that the mechanism of action appears to involve a neat reaction between proteosome’s N-terminal threonine and the epoxyketone warhead, resulting in a 6-membered ring formation. While this seemed to be a reasonable mechanism of action, which was captured crystallographically, there is a new interpretation and, while the difference might appear minor to some of you, I think it is quite substantial.

Oprozomib is an orally bioavailable epoxyketone derivative currently in clinical trials for the treatment of solid tumors. The high resolution electron density maps obtained by Bourenkov and Chari reveal an electron density for the inhibitor-threonine conjugate that is larger than morpholine. It appears that a seven-membered 1,4-oxazepane ring structure is formed instead. 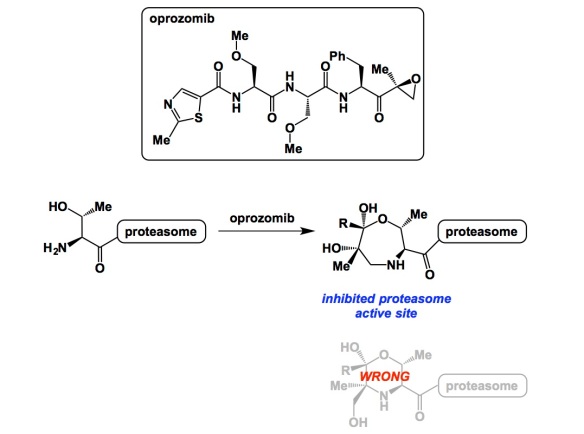 It is interesting that the Sn2-type 7-endo-tet reaction appears to be the preferred pathway. I am curious to know if this finding has any bearing on Onyx’s patent claims. The composition of matter that is being protected by a patent is sometimes linked to the mode of action. As a corollary to that, what is to prevent someone from designing follow-up molecules with higher propensity to form 7-membered rings? There is probably room to innovate here.

8 thoughts on “A mechanistic revision”