The evolutionary history of homo sapiens is likely going to be written some millions of years from now. Who knows where this will take place, perhaps on some other planet. I submit that we might not be treated too kindly in terms of our intelligence. I am not even going to elaborate on political matters because I not an expert. But I suppose I know chemistry reasonably well, so let’s stick to this craft. Below is a slide I used to show 14 years ago when my lab was entrenched in synthetic electrochemistry. The argument is that, if you pay your electricity bills, electrons cost about 0.6 cents per mole and just flow out of your electrical outlet if a wire is inserted. This was in 2003, so the prices might have gone up to, say, 0.8 cents per mole. You can also tune applied potential using a range of electrochemical techniques. But here is the best part: all of the reagents on the list below are ultimately produced using electrochemistry in the chemical industry… Those who will decide to evaluate us might have something to say about the way in which homo sapiens then had to deal with the atomic waste that came from all those reductants and oxidants. Maybe we won’t even have to wait for millennia to pass! Perhaps there will be a class action lawsuit against chemical industry, which knowingly butchered the mass balance and ignored investment toward direct use of electricity to make chemicals. 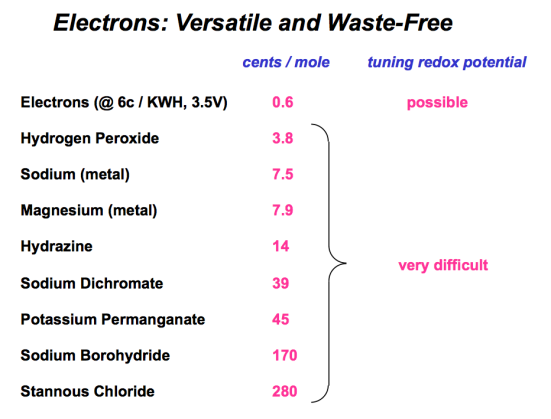 Jokes aside, there is always a counterargument, isn’t there? Here is one in defence of our species: constrained by the lack of a universal energy carrier, we had no choice but to resort to these “intermediary” products to move electrons around. This is also a reasonable thought, ladies and gentlemen. Capital investment in electrochemical plants is not a joke and some of the arguments for direct use of certain kinds of energy (for instance sun light everyone talks about) eventually run out of steam because it is simply more economically feasible to have a carrier, however imperfect it might be. I always remember Surya Prakash’s dictum: there is no problem with energy on this planet, but there is a problem with the energy carrier. So we might be doing our best, after all.